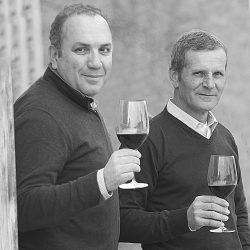 There is a wine, it is called Rosso dell’Abazia.

There is a village, called Nervesa della Battaglia, situated on the hills of the Montello in the province of Treviso, Veneto, Italy, land of vines and wine. There are our vineyards which we cultivate in a compatible and intelligent way. There is an on-going research in the vineyards that shortly will abolish all chemicals by just induce the plant to use its natural self-defence. This is why it is called “Vino Libero”.

There is more in the bottle: very important prizes awarded by the most prestigious Italian guides one of which has been given to us for the 20th time: the “Three Glasses “ in “Gambero Rosso” guide.

Grape varieties: Cabernet Sauvignon, Cabernet Franc, Merlot
Soil: Ferretto soil (reddish-brown clayey soil)
Training System: Guyot
Density: 6/6,300 vines per ha
Harvest: from the end of September for Merlot and late October for Cabernet
Wood ageing: from 15 to 24 months according on the variety and the vintage
Wood used: oak
Bottle ageing: from 1 to 2 years
Alcoholic Content: 13.5%
Market release: at least 4 years after the harvest