Le Volte dell’ Ornellaia combines a Mediterranean expression of generosity with structure and complexity, reflecting the philosophy of Ornellaia. 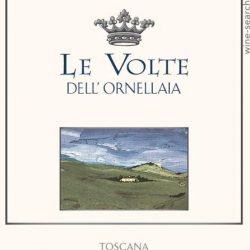 “Son of a particularly hot, dry year, Le Volte dell’ Ornellaia 2017 is characterised by its usual deep ruby red colour. A pleasant bouquet of ripe red fruits and spices is sustained on the palate by crisp acidity and an open, enveloping tannic structure.”

The year 2019 was characterised by a highly variable climate, which alternated periods of cold and rain with long bouts of drought and heat. After a rather normal winter, budding took place in the first week of April. Cold and rainy conditions throughout April and May considerably slowed down development of the vegetation, delaying flowering to 10 days later than usual. In June, the climate suddenly turned hot and dry, with peak temperatures of 37°C reached at the end of the month. All summer long the weather remained hot and sunny, with temperatures 2°C higher than average and 45 consecutive days without rain. In the last week of July, the long period of drought was interrupted by two days of rain, readjusting the temperature to the seasonal norm, with ideal conditions for grape ripening. The harvest began slowly on September 5th. As usual, in the last week of September a drop in temperature occurred and preserved the vintage’s great finesse and aromatic freshness. After the rainfall on September 21st, weather conditions were again sunny and allowed us to finish the harvest of the late ripening varieties on October 4th.

The different varietals were fermented separately in small steel tanks to maintain their varietal characteristics. The alcoholic fermentation was followed by malolactic fermentation, again in steel tanks. The wine was then aged for 10 months, partly in barrique used previously for Ornellaia and partly in concrete tanks, to obtain the perfect balance between tannic structure and an expression of fresh fruit.

“2019 gives us a Le Volte dell’Ornellaia with great balance and expressivity. With its bright ruby-red colour, intense scents of red berries and rose petals are clearly distinguishable on the nose, while on the palate the taste is full-bodied and enveloping, characterised by dense tannins and a vibrant acidity which make this a highly pleasant and enjoyable wine.”

If you are in or close to Cambridge you cannot miss @alpinocambridge. I made a detour in my itinerary so to have lunch there and I could not be happier! #cambridgenz #waikato #restaurant #foodandwine #italianwine #italianrestaurant

Buon Natale with @montevetrano. Light on its feet and long lasting: that seems a good omen for the next year too!
#campania #redwine #italianwine #christmas #winestagram