You are here:
On April 29th, we learned that Barbaresco’s Angelo Gaja had partnered with Alberto Graci to create a new winery and vineyard on Etna. The announcement was interpreted as the ultimate act of Etna legitimization. This tiny wine appellation that straddles the cone of the dangerous volcano at the heart of the Mediterranean has suddenly outgrown its “up-and-coming” status. An Italian wine authority as important and prolific as Angelo Gaja had definitively endorsed the Etna promise. The excited narrative of the day was that Etna had finally earned a permanent spot on Italy’s enological map. 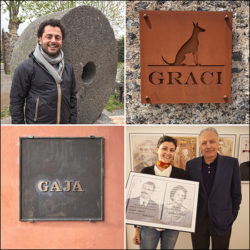 On the morning the news broke, Giuseppe Benanti of the eponymous Etna winery confirmed his exhilaration in front of hundreds of Assovini Sicily colleagues and members of the wine press. He declared this a great day for Etna. The online news blog Cronachedigusto.it first broke the story and wrote: “Angelo Gaja’s arrival will make noise across the entire world of Italian wine and it will sanctify Etna as one of the great leading wine regions.” My colleagues at Wine Spectator published an article entitled “Piedmont Wine Star Angelo Gaja Invests in Sicily’s Mount Etna” with the subhead: “Joint winery venture with Alberto Graci spotlights a new corner of Italy’s volcanic terroir.” Over at Decanter, the sentiment was: “Gaja’s move is the latest evidence of growing interest in Etna, and wines from volcanic regions in general.”
“Working with Angelo is like getting a dose of positive energy,” said Alberto: “He is a volcano on the volcano.” He told me that this joint venture represents a new learning opportunity for both men. Angelo Gaja has never farmed on Etna, and Alberto Graci has never farmed on the southern side of the volcano. Alberto told me: “Etna is much stronger than me and him. We approached this venture with humility because we recognize that Etna is stronger than everything else. Etna will dictate the identity of the wine we make and we will follow. We will follow the volcano.”
https://www.sapori.co.nz/product-category/graci/
Categories: Gaia, Graci, SiciliaBy MarcoSeptember 3, 2017Leave a comment